If they reach an agreement, Mukesh Ambani and Jeff Bezos will turn from rivals to allies, creating a giant retail group in India. 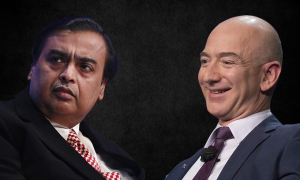 If successful, this deal will not only create a giant retail conglomerate in India, but also help Jeff Bezos and Ambani from rival to ally in one of the world's fastest growing retail markets. .

With a value of $ 20 billion, it will be the biggest ever with both India and Amazon, according to Bloomberg data. After the information above, shares of Reliance Industries - Group of Ambani this afternoon soared, to the highest level ever.

In India - where the majority of people are still accustomed to buying in small street stores, this deal could be Amazon's way of admitting it needs a partner with a strong presence there. Reliance will provide stores for Amazon to fulfill its ambitions in a country where online shopping still accounts for a small fraction of the $ 1 trillion retail market.

On the other hand, the deal with Amazon will help reinforce Ambani's ambitions to create an e-commerce empire in India, similar to Alibaba in China.

A Bloomberg source said Amazon has yet to make a final decision on the size of the potential investment and negotiations may still fail.

Reliance Retail operates the largest consumer electronics supermarkets and chains in India, as well as the online fashion and grocery store JioMart. The business generated $ 22 billion in revenue in the first quarter. Reliance Retail currently has 12,000 stores in nearly 7,000 towns in India.