Temasek's 2020 portfolio and shareholder return are both negative, partly due to Covid-19.

Temasek - the investment company of the Government of Singapore - just ended fiscal year 2020 on March 31, with a portfolio value (NPV) of S $ 306 billion, down more than 2% compared to 2019. Portfolio Main investment is concentrated in Asia, accounting for 66% of the proportion. In which, China and Singapore continued to be the two leading countries, accounting for 29% and 24% respectively.

Total return to shareholders (TSR) at -2.28%, if calculated in USD, the negative return is more than 7%. Part of the impact has disrupted this company's continued rising streak since 2016 due to the emergence of the Covid-19 pandemic. 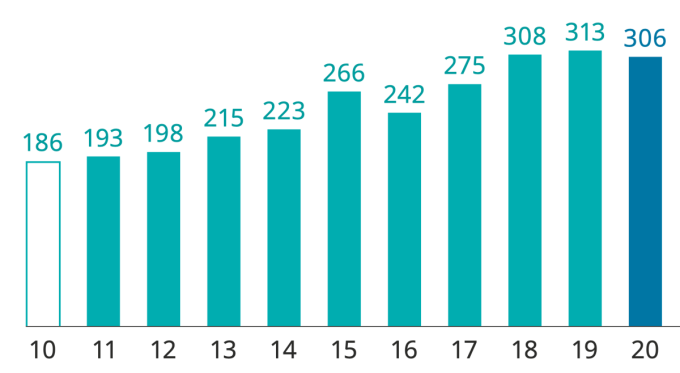 In the Vietnamese market, Temasek has invested in Scommerce - the parent company of Express Delivery (GHN) and Instant Services Joint Stock Company (AhaMove).

In 2019, through its subsidiary Seletar Investments, Temask has poured more than 660 billion dong to buy VNG shares. This fund also holds stakes in many listed companies. Most recently in June this year, Temasek was among the group of foreign investors who spent $ 650 million to buy shares in Vinhomes.

Mr. Lim Boon Heng, Chairman of Temasek Holdings, said it was an early decision to join, as well as mobilizing resources, partner networks and companies in the portfolio to assist in the fight against Covid- 19. "Doing the right thing and doing the good is more urgent than ever. No one is safe, until everyone is safe," said President Temasek.

Representative Temasek said the outlook for the global market is still volatile and uncertain, with new challenges emerging. In particular, the resurgence of Covid-19 infections in a number of countries risks derailing the recovery process.

Besides, concerns about geopolitical tensions and escalating trade due to the US-China conflict and the impending US presidential election also affect the investment trend. "We continue to be cautious and watchful of risks surrounding the global economy," said Michael Buchanan, Temasek's director of macro strategy.

In China, the investment firm assessed that business has gradually been restored and recent data show that the economy is recovering. Implementing reforms may face challenges, but authorities may still prefer to focus on rebalancing the economy.

Europe entered a recession in the first half of this year. Initial recovery speed was faster than expected, but for now only modest. In Singapore, the economy also suffered a serious recession.

According to Temasek, countries around the world are transitioning to a "new normal state" to adapt. The investment company expects certain parts of the economy, especially technology services, to remain resilient in the context of many changes. "One way for Temasek to shape our portfolio for the future is to find innovative companies that are at the forefront of developing new or disruptive solutions and creating new opportunities," said Yeoh Keat Chuan. Commented, Senior Director of Business Development Division.