Which bank is selling most life insurance strongly?

Techcombank, VIB and MBBank cross-sold life insurance the most in the market, earning more than a trillion in 2019, according to VDSC.

According to the latest report by Rong Viet Securities Company (VDSC), in 2019, Techcombank earned 2,380 billion VND from life insurance fees, accounting for more than 13.5% of the banking industry's sales. Instead of using people from a partner insurance company, Techcombank is following the model of a bank employee directly introducing, consulting and taking care of insurance contracts for customers.

At the shareholder meeting at the end of February, Techcombank leaders said that nearly 4,000 Techcombank employees directly contacted trained and certified customers from the Ministry of Finance to advise customers on insurance. 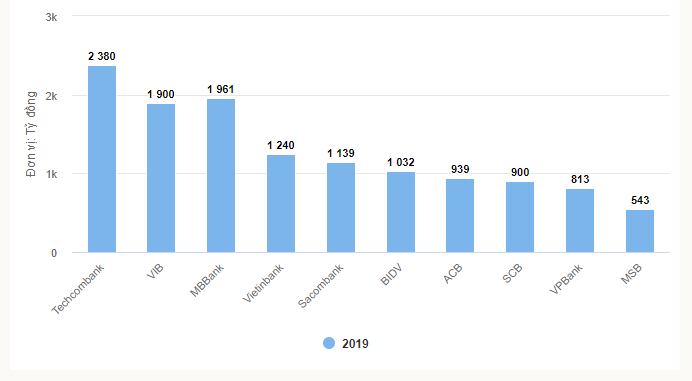 VDSC assesses that the market share will be divided again when large-scale banks are also actively participating in this piece of cake. Vietcombank and ACB will expand their insurance distribution market share strongly thanks to the insurance cooperation agreements signed recently, backed by a large and loyal customer base.

Experts also expect that bancassurance will be the main driver for the bank's service income growth in the coming time due to the development of the insurance market and the trend of promoting cross-selling at banks.

From the second quarter of this year, the Navigos report also showed that the trend of recruiting personnel in the bancassurance segment began to appear at banks. In which, according to the survey, Techcombank and VIB are the most active companies in recruiting employees who specialize in selling insurance.

However, in the first half of this year, according to data from VDSC, the growth in service revenue of listed banks (including cross-insurance) was weaker than the previous year. Due to the poor demand for credit, cross-selling activities as well as trade finance, foreign exchange earnings are also affected.

In the first 6 months of the year, service revenue of listed banks grew only nearly 10% over the same period, lower than the 42% increase in the first half of 2019. The proportion of service revenue contribution to total Operating income remained at 10.6%. Among listed banks, Techcombank and VPBank are the only two companies that still maintain high fee revenue growth of up to 40% thanks to a diversified service fee structure.